Are 5G Phones Safe For Your Health?

Are you ready for your cell phone’s performance to be taken to a whole new level? We are talking light speed connectivity. Videos, movies, and music that currently take you several minutes to download will soon only take a few seconds. This sounds exciting but are 5G phones safe?

Welcome to the world of 5G the next exciting generation of cellular technology! Reports are that data speeds will be up to 100 times faster than is currently available with 4G and that 5G will be able to support a minimum of 100 billion devices in the new spectrum. Once 5G is deployed we’ll be able to move confidently into the era of the Internet of Things (IoT).

IoT is primed to give us cars that drive themselves, refrigerators that can automatically restock your groceries when you’re getting low, washing machines that can order their own laundry soap, not to mention ultra-fast movie downloads and video streaming from anywhere you go, when you are on the go.

As a society we are constantly pushing the boundaries of our technology. While we often make many things in our lives much more simple and efficient, we also tend to underperform safety studies before they are approved for mass use. The Technology Behind 5G

These MMWs are short-ranged waves and will not emanate as far as the frequencies previously used. To accommodate this, there will be many, many more, smaller-sized cell towers in populated areas.

Yes, this could mean smaller antennas, but literally everywhere. This is a game-changer for our health as it’s very possible that soon we’ll always be near a cell tower, exposed to extremely high frequencies of radiation. Let’s call a spade a spade. MMWs are pulsed microwave radiation. That’s to say they are a form of radio frequency electromagnetic field. We know from thousands of existing studies that pulsed radio frequencies can have a detrimental effect on human and animal health (1).

Yes, cancer. But not just cancer. Numerous peer-reviewed studies now link these pulsed microwave frequencies to a long list of very serious illnesses as I am about to cover. Are There Safety Standards For 5G?

Aren’t there safety standards protecting us from these dangers?  Yes there are. In the US these standards are determined by a government agency called the Federal Communications Commission (FCC).

But, the FCC’s guidelines only take into account health effects from physical thermal heating, that’s to say where there is a secondary heating effect. The research, however, into electromagnetic fields (EMFs) generally and MMWs specifically (the frequency that 5G will be using), are showing health effects even when there is no heating effect.

While there is a long list of research on the effects of EMFs, there is only a small amount that can be linked to the types of frequencies seen with 5G radiation. So far, there have been studies highlighting concerns with skin and eye health, as well as implications for bacterial resistance. A study conducted by NYU Polytechnic School of Engineering in 2015 found that with 60GHz MMWs, 90% of the transmitted power is absorbed into the epidermis and dermis layer of the skin (2). To put this into perspective, these are the layers that are damaged when someone gets a sunburn. The difference is, MMW’s can penetrate protective barriers such as clothing and sunscreen, so protection is limited.

That’s a lot of radiation for the skin to take in. According to Dr. Ben-Ishai of the Hebrew University the skin also becomes more conductive in the presence of these wavelengths as the sweat ducts begin to act like helical antennas. Essentially channeling these unwanted energy frequencies directly through the skin.

A 2009 study from Japan’s Kanazawa Medical University found that the thermal effects induced by MMWs can “penetrate below the surface of the eye.”  It concluded that 60GHz MMW antennas can cause thermal injuries of varying levels (3).

In 2016, the Yerevan State University of Armenia carried out a study on different bacteria such as E-coli by blasting them with low intensity MMWs; just like what will happen when 5G is fully rolled out. Since MMWs are absorbed by water particles and our cells are mostly water, there are concerns that this could bring about a lower resistance in humans.

Also, the study found that MMWs modified properties of these bacteria by altering their sensitivity to “different biologically active chemicals, including antibiotics” (4). The MMWs seem to be making the bacteria more resistant to antibiotics. Not exactly good news.

There haven’t been nearly enough studies done on 5G. And as Dr. Joel Moskowitz points out, most 5G studies are misleading because they do not pulse the waves.

This pulsing of the waves is no small detail. As Alasdair Philips from Powerwatch comments 5G will be more biologically active than previous generations of cellular technology. What we are actually saying here is that 5G will potentially be much more dangerous than current cell technologies.

For a more in-depth analysis of the potential dangers of 5G technologies, check out this powerful resource. How To Protect Yourself From 5G

It’s not absolutely clear what 5G will mean in terms of our health. But what is 100% clear is that 5G will only contribute to the already concerning levels of electrosmog in our environment.

While the implications of these technologies for our health are somewhat predictable, they absolutely have not been adequately studied for safety.

This is why I recommend taking steps to safeguard your health as much as possible from these different forms of electromagnetic pollution. Here are some steps you can take. 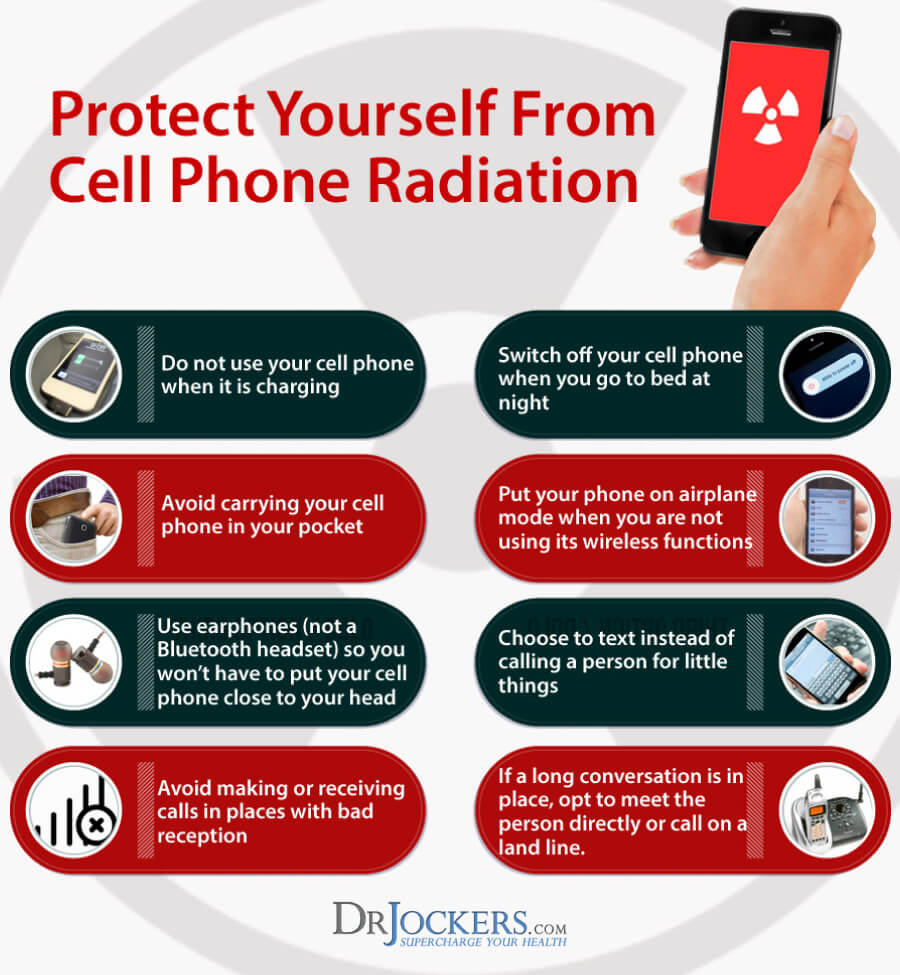 Keep Away From Your Body

Read your smartphone’s owner manual. You may notice that it warns against (most of them) using your cell phone directly on the body. This means try not carrying it around in your pocket or bra. You can also invest in an EMF-blocking case that can protect you from the constant radiation emanating from your phone.

One that I have found to be very powerful in this regard is the Defender Shield.

Do Away With Wireless Devices

Eliminate any form of wireless device in your home. Use a hardwired connection as opposed to WiFi and get rid of cordless phones, wireless baby monitors and the like. In today’s world, you may not be able to eliminate all wireless devices, but I would highly recommend at least using a hardwire connection for internet. If you must use wifi, switch it off during the night.

Eliminate Bluetooth devices from your life – particularly Bluetooth headsets. Replace them with wired or air-tube versions. If you stream a lot of music on your cellphone, try instead downloading that music to your phone and listening with it in airplane mode.

Invest in an EMF meter to identify EMF hotspots in your home or call in an EMF consultant to do it for you. Seeing is believing. It’s only when you have actual EMF readings that you will have the necessary information you need to take steps to make your home a healthier place.

You want to eliminate EMF exposure in the bedroom as much as possible, I would say this is one of the most critical tips. Remove electronic devices from the room, especially cell phones. If you have an alarm clock, move it as far away from the bed as possible.

You can also install EMF filters in your outlets. Greenwave is a great brand that is simple to install. You will want to plug in at least 2 of these in your bedroom, ideally into the outlets closest to your bed. Finally, you can simply move your bed away from the walls.

AT&T and Verizon have already announced the development of 5G phones network in select cities.  Other service providers are following hot on their heels. Don’t delay. Take action now to protect you and your family from the hidden dangers of electro-pollution.

Additionally, Dr. Jockers recommends grounding your body daily by going barefoot outside each day on grass, dirt, sand or even concrete to get the healthy EMF exposure emitted by the Earth itself.  This form of EMF is very familiar to our bodies and helps to relax the stress response and promote and environment of rest and repair in our internal physiology.  It is simple to do and cost nothing at all!  Read more about grounding in this article. Lloyd Burrell is the founder of ElectricSense.com. His website offers solutions to the growing number of people whose health is being compromised by exposure to wireless and similar technologies. Download his free EMF Health Report today!