Castor oil has been around for centuries, dating back to its use in Egypt over 3,500 years ago. (2) Castor oil packs have the ability to promote the circulation of blood around an organ, around an area of the body, and increase the flow of fluids through the lymphatic system.

Castor oil effectively supports the body’s natural detoxification abilities. Traditionally used in alternative medical practices such as Ayurvedic therapy, research regarding the effects of castor oil remains limited due to lack of funding for clinical testing. However, the use of castor oil remains widespread. Anecdotal evidence suggests that castor oil packs are a trick of the health trade that has not been forgotten and with good reasoning.

Today, many medical experts around the world recommend individuals use castor oil packs to help detoxify their bodies. What Is Castor Oil?

Also known as Ricinus Communis, castor seed oil is created from pressing the seeds of the plant to be used for a variety of conventional purposes. Castor oil is made up of phytochemicals including:

Composing 90% of the chemical structure of castor oil, rincinoleic acid is a fatty acid believed to be the responsible mechanism by which castor oil exhibits numerous health properties. Ricinoleic acid is released in the intestines and has been found to bind with receptors that line the intestinal tract and the smooth-muscle cells in the uterus therefore promoting natural healing abilities. (2, 4) Castor oil is considered safe by the Food and Drug Administration (FDA) and the Joint Food and Agriculture Organization Expert Committee on Food Additives which is also made up with members of the World Health Organization. (1)

Although generally recognized as safe and found in high concentrations in some cosmetics such as lipstick, toxic effects have been associated when castor oil is consumed. Therefore, is not recommended to be taken orally. (1)

Given the lack of support for the research of castor oil packs in clinical trials, physicians remain unaware of the physiological effects that castor oil has on the human body. Limited studies and tales of midwifery have reported symptoms of ingesting castor oil to include nausea, cramps, and loss of fluid and electrolytes (2).

Castor oil is broken down by your small intestine into ricinoleic acid, which acts as an irritant to your intestinal lining.  This effect is what gives castor oil the ability to reverse constipation—but it’s also the reason that some people report digestive discomfort, diarrhea, and other gastrointestinal side effects.

However, it can be effective for alleviating constipation, and is used by some midwives to help induce labor.  If you take castor oil internally to relieve constipation, begin with 1 tsp in the morning and see if you get the relief you need.  If not, you can try 2 tsps. the following morning.

This should be totally safe, but if you notice increasing pain or digestive discomfort then back off. Castor oil packs involve the application of externally administering castor oil to the skin’s surface so that it can slowly be absorbed. Castor oil packs have many potential therapeutic uses including the ability to treat the following conditions: (1, 3, 4, 5, 6) Castor oil exhibits anti-cancer properties by promoting the lymphatic system to remove the buildup of debris and toxins in the body. When the lymphatic system is not functioning properly, liquid can accumulate within the network of tubes responsible for filtering bacteria and become stagnant. One study found that injecting rats with castor oil helped to suppress tumors which developed as the result of liver damage. (1)

Other research has found that when oil is absorbed through the skin, not only is there an increase in both lymphatic drainage and blood circulation, but there is also an increase in lymphocyte production. Lymphocytes are critical to the immune system because they signal a call for aid when the body is under attack from foreign substances. (4)

For these reasons, castor oil packs may be an alternative therapy that can boost the immunity of individuals with HIV (human immunodeficiency virus infection) or AIDS (acquired immune deficiency syndrome). It may also be possible that castor oil can have health benefits when simply massaged onto the skin. Castor oil is popularly known in folklore as a potent cathartic which stimulates the complete release of substances from the gastrointestinal tract and ultimately causes defecation. (3) Castor oil packs however may have the same therapeutic properties when applied to the skin following absorption.

Applying castor oil packs to the abdominal region can help you achieve regular bowel movements as well as experience an increase in energy. As a result, scientists also speculate that this laxative effect, which simultaneously removes infectious agents from the lining of the gut, may also alleviate symptoms of depression. (4)

Elderly patients participated in a study in which they were administered castor oil packs for therapeutic care. Eighty percent of these individuals sought relief from symptoms of constipation for over ten years and were observed to have immediate improvements following less than 3 days of treatment. (5) The liver serves vital functions in the body and is absolutely essential for the process of detoxification. As you have already read, a weakened lymphatic system increases the buildup of debris, toxins, and pathogenic bacteria; weakens organs; and increases the risk for cancer.

For example, consider the liver to serve the same function as the garbage disposal in your kitchen. The liver helps circulate fluid in the body and transforms toxins into a substance in which then can be:

This is why noting a chalky white appearance in your stool can indicate to you that your liver is functioning poorly. Bile is produced by the liver when toxins are being eliminated and it is also what gives stool its brown appearance.

Applying castor oil packs to the skin’s surface near your liver can assist in the detoxification of toxins from the body promoting optimal gastrointestinal health and reducing your risks of cancer as a consequence of stagnant toxic waste within the lymphatic system. Purchasing a high quality castor oil is required to receive the optimal healing benefits. There are a few recommendations to follow when purchasing castor oil to ensure you are receiving the highest therapeutic grade castor oil available. The following is a list of labels that you should look for when buying castor oil: 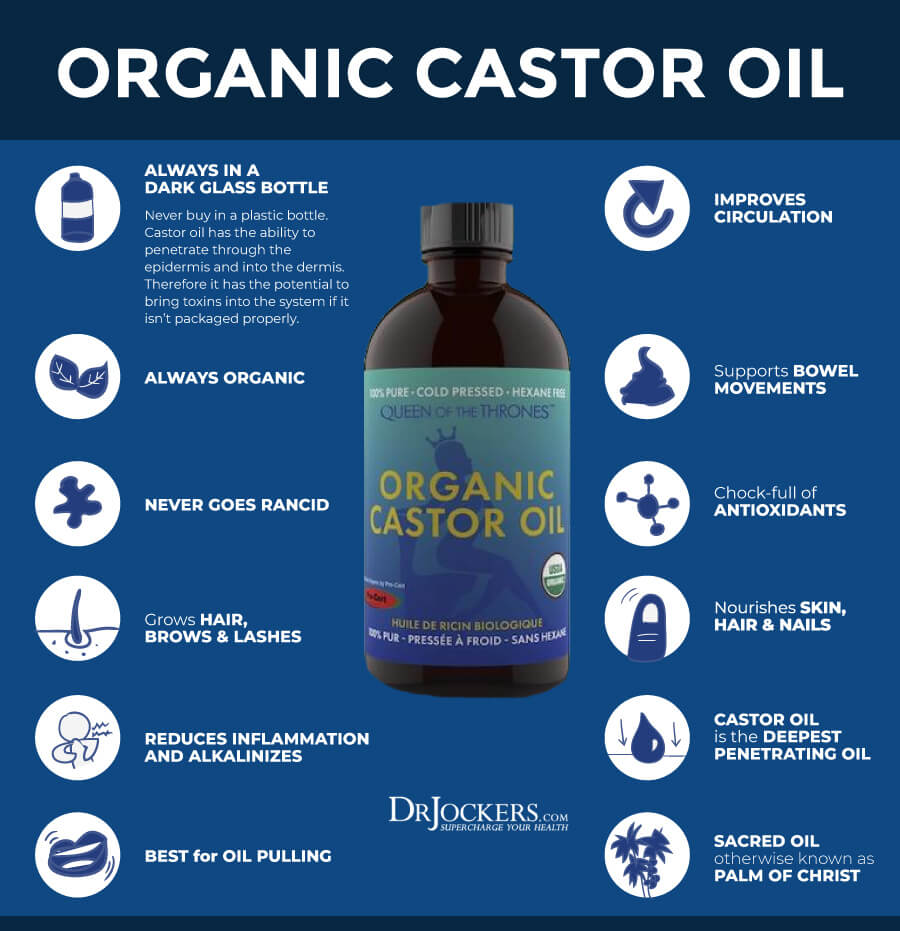 Where to Purchase Castor Oil Materials

Whether you are seeking to purchase the whole kit to create a castor oil pack or you only aim to buy the castor oil itself, a few recommended products follow to help you begin your search for a high quality product.

It is important to get organic castor oil in a glass jar because pesticide residue contained in the castor oil and the plastic residue (phalates) from the bottle can be absorbed through the skin.

Before applying a castor oil pack to the skin’s surface, test for skin sensitivity. Rub a small amount of castor oil directly onto a limited area of skin to determine if a reaction develops.

Another recommendation for use is to avoid using electric heat pads without an automatic shut off following a period of time. Many individuals provide testimonials of falling asleep with ease during castor oil pack treatments.  If you choose to get the pieces separately (as opposed to the Queen of Thrones castor oil pack) then here are instructions on how to do them correctly.

You will see that it can be a lot of work and that is why I believe the Queen of Thrones pack makes it much easier to do as it provides the flannel with ties on it so you don’t need to wrap yourself in plastic!

When to Avoid the Use of Castor Oil Packs

The use of castor oil packs is not recommended if you are experiencing the following circumstances: Castor oil packs have been said by many to relieve their symptoms of constipation, remove ovarian cysts, treat skin problems, and are used as a remedy for inflammation resulting from joint and muscle pain. What symptoms do you have that castor oil packs can help you heal from?

Until alternative medical remedies such that as castor oil packs receives greater support and funding for scientific research, the potential uses for its powerful healing abilities remain only anecdotal evidence. If you are seeking a treatment to help your body naturally detoxify and help you achieve optimal health, give castor oil packs a try and share your story. 7. The Weston A. Price Foundation: Support for the Liver: Link Here