Natural cancer treatments are becoming more and more popular due to the rise in cancer diagnosis and the failure of the medical system to find lasting and successful cancer therapies.  Today, you can find clinics all around the world that use a wide variety of different natural and alternative therapies to help people with all forms of cancer.

Cancer may arise from numerous physical problems including the lack of oxygen to cells, a weakened immune system, excessive acidity and the toxic accumulation of carcinogens (or DNA mutating substances). Many of these problems can be treated and therefore so may cancer itself. We can use food as medicine in our natural cancer approach.  A ketogenic diet is rich in healthy fats and low in carbohydrates.  This diet stimulates the production of ketones in the body through a biological process that circumvents the use of respiration within the mitochondria.

Diets which heavily burden the mitochondria with energy synthesis increase the risk of free radical formation and also increase the rate of mutations within cells.  These mutations can lead to various cancers such as: (1)

Instead, a ketogenic diet reduces the amount of energy which must be supplied from the conversion of glucose found in both simple and complex sugars and therefore also helps alleviate symptoms of individuals with metabolic conditions. Cancer cells thrive off of the energy created from glucose fermentation.  Glucose fermentation is also called anaerobic metabolism due to the lack of oxygenation (2).

Pastured beef and dairy products, organic poultry, good fats such as coconut oil and avocados, low carbohydrates fruits and vegetables such as asparagus, cabbage, lemon and limes are all ketogenic approved foods with cancer protective properties. A ketogenic diet has been shown to significantly delay the progression of tumors and increase survival rate periods by more than 50% (3).

A synergy of health benefits further results when a ketogenic diet is coupled with hyperbaric oxygen chamber therapy. Results involve a decreased rate of tumor growth, improved state of ketosis and lower blood glucose concentration (3).  This is a powerful natural cancer approach.

Unlike cancer cells, healthy cells cannot flourish without an adequate oxygen supply. Hyperbaric oxygen chamber therapy is an effective strategy to increase the oxygen flow to all cells and organs and also buffer the pH of your body’s environment to better equip cells to maintain their normal functions.

Juicing is a highly effective strategy to flood a tumor ridden body with powerful nutrients and antioxidants which equip the immune system in the fight against cancer. Juicing fruits and vegetables aids the digestive tract with a plethora of phytonutrients which can be easily absorbed at a higher rate than the same raw or cooked foods when consumed. (5)

Eating sprouts is another great way to naturally boost the anti-cancer properties of cells by supplying them with a rich abundance of natural antioxidants that inhibit cancer growth. Only a small concentration of sprouts from vegetables such as kale, broccoli and cauliflower is required daily to contribute protective properties.

Sprouts support natural enzyme processes and cellular protective properties including the fight against inflammation, free radicals and cancer. Nutrients found in sprouts include: (6)

Sulforaphane in particular helps stimulate the body’s natural detoxification pathways to remove toxins and prevent the accumulation of further carcinogens. Quercetin is yet another nutrient found in sprouts which has been shown to promote apoptosis, or cell death and inhibit the continued spread of cancer. (6)

Although juice is most dense in nutrients and cancer protective properties when fresh pressed and immediately consumed, preparing juice in advance is also advantageous. Be sure to store juice in an airtight container and in a dark part of your fridge to ensure optimal nutritional benefits. Both light and air oxidize foods immediately after being cut and should be minimized.

Fermented foods are loaded with healthy bacteria which play a major role in regulating the health of your entire body and mind. Individuals who harbor harmful microbes in their gut microbiomes are at an increased risk for metabolic disorders, disease and various cancers. Some of these cancers include: (14)

Fermented foods contain a type of bacteria known as bacteroidetes which produce a product called butyrate necessary for health. Butyrate has anti-cancer properties and also performs enzymatic responsibilities in assisting the gut in breaking down starches. Some of the best fermented foods which you should incorporate into your daily diet include grass-fed yogurt, kefir, coconut water kefir, kombucha and cultured vegetables such as sauerkraut. (15)

Vitamin D is a critical component of central nervous system responsible for both development and function. Vitamin D continues to astound researchers in its anti-inflammatory and antioxidant capabilities and is associated with reducing autoimmune complications through limiting natural killer cell secretion during certain conditions such as a woman’s pregnancy. (16)

Perhaps one of the most important functions of vitamin D is its ability to regulate inflammatory pathways associated with cancer and is especially crucial in the proper develop of an immune system regulating protein known as GcMAF (16, 17).

Vitamin D is required for the body to synthesize GcMAF. GcMAF influences the ability of tumor cells to proliferate and for the very same reason also can reverse the effect of certain cancers including breast cancer. Clinical studies support the ability of GcMAF to treat symptoms of a variety of cancers including bladder, ovarian, head and neck and other lymphomas. (17)

Clinical studies have shown that herbs like curcumin which is created from turmeric are powerful anti-inflammatory agents and can treat cancer symptoms (11). In fact, these studies show that turmeric exhibits similar inflammation prevention control as do synthetic drugs such as ibuprofen and aspirin and over 570 research studies support the ability of curcumin to have anti-cancer properties (12).

This spice makes an easy addition to a meat marinade or to your favorite sauces especially those rich in good fats such as grass-fed milk which increases its absorption. Curcumin increases the concentration of other important antioxidants such as glutathione and exhibits a strong anti-inflammatory effect on cells by limiting the damage of oxidative stress to organs. (13)

Enzymes in our body are responsible for stimulating normal biological functions which aid in the removal of toxins from the body and also stimulate anti-inflammatory and anti-cancer agents. You may remember your high school science teacher diagramming the several conditions which must be met for enzymes to function appropriately and so you may also recall that enzymes function at a preferred pH.

The typical American lifestyle consists of chronic conditions which degrade these optimal working environments which enzymes function. From the air we breathe, food we eat and lotions we apply we offset the normal pH of the organs in our body and contribute to the development of cancer.

Nutrient dense foods like broccoli are abundant in enzymes such as quinone reductase and glutathione-S-transferase which enable the body at removing debris. Enzymes especially promote the healthy function of organs constantly inundated with toxins such as the liver, stomach, intestines and lungs.  Lemon and lime provide these organs with organic acids which help buffer pH and natural enzymes which promote the body’s natural abilities to metabolize nutrients. (6, 7)

Enzyme therapy has been found to be so effective at relieving the toxic burden on our bodies that enzyme therapy is used to treat individuals who have undergone chemotherapy in order to reduce symptoms of pain, vomiting, fatigue and nausea (8).

This is different than using digestive enzymes in that you take these away from meals.  The protoeolytic enzymes go in and break down the outer protein coat that surrounds cancer cells and protects them from the bodies immune system and from oxidative therapies like chemotherapy and radiation. Numerous testimonies surround the ability of the Budwig Protocol to treat and even cure cancers including cancer of the lung, prostate, breast, ovaries, pancreas and even brain. It is a protocol which in part combines organic low fat cottage cheese with flaxseed oil into a mixture called quark along with lifestyle changes which limit the body’s toxic burden. This mixture is believed to prevent and heal cancer and has been researched since 1952 by world leading experts in fats and oils (10). But how does cottage cheese and flaxseed oil treat cancer you ask?

The concept is that dead cells in our body lack a charge which stimulates proper cellular function. Flaxseed oil is highly abundant in electrons and saturated fats that when combined with a sulfur protein in cottage cheese, a chemical reaction takes place and allows the electrons to enter these “dead” cells to be recharged.

These electron rich unsaturated fats improve respiratory enzyme function, brain function and cardiac health and stimulate all glands in the body. The Budwig Protocol diet attracts oxygen into our cells and in this oxygenated environment kills off cancer cells. (10)

Dr. Budwig advised her patients suffering from cancer to consume quark up to 8 times daily and possibly for up to 6 months in order to treat severe and possibly terminal cancers. The following is a recommended recipe to create quark: There are major detoxification pathways which your body can undergo to promote healing from cancer. Some of the best strategies to promote the removal of toxins from your body and increase healing are as follows:

In order to successfully remove toxins from your body, you must also heal your emotional health as well. Receiving an aromatherapy massage stimulates the lymphatic system, eases your mind and improves overall health. Essential oils have even been shown to boost the health of cancer patients and relieve anxiety and stress (21).

The proper functioning of the body’s glands is critical to removing toxins from our body necessary in treating cancer. Dr. Budwig advocated that the sun is a natural source of photons which creates a magnetic field and attracts electrons. She also believed that sunlight exposure stimulates glandular function of the pancreas, bladder, salivary glands, liver and gall bladder. (10)

The sun’s rays do not only stimulate vigor and vitality but they heal the body from the inside out. Consider the idea that each individual’s body acts as an antenna source to capture the sun’s natural photons. Naturally, the electrons in our body become energized and better equipped to heal. Sunlight boosts immunity which better equips the body from defending against foreign invaders and cancer growth.

Beta glucans are naturally occurring compounds found in nature but not in the human body. Beta glucan is a complex sugar molecule which supplements the immune system in coordinating well targeted attacks on foreign agents. As a result, beta glucans provide immunomodulation and prevent excessive inflammation resulting from an autoimmune response. (19, 20)

Beta glucans can be found in mushrooms, yeast, fermented foods, as well as indigestible soluble fibers such as oat and barley and should be consumed to help the fight against cancer. Beta glucans activate immune cells in the body such as antibodies, natural killer cells, cytokines, T-cells and macrophages to better target cancer cells. These cells aim to detect and destroy tumor growth. 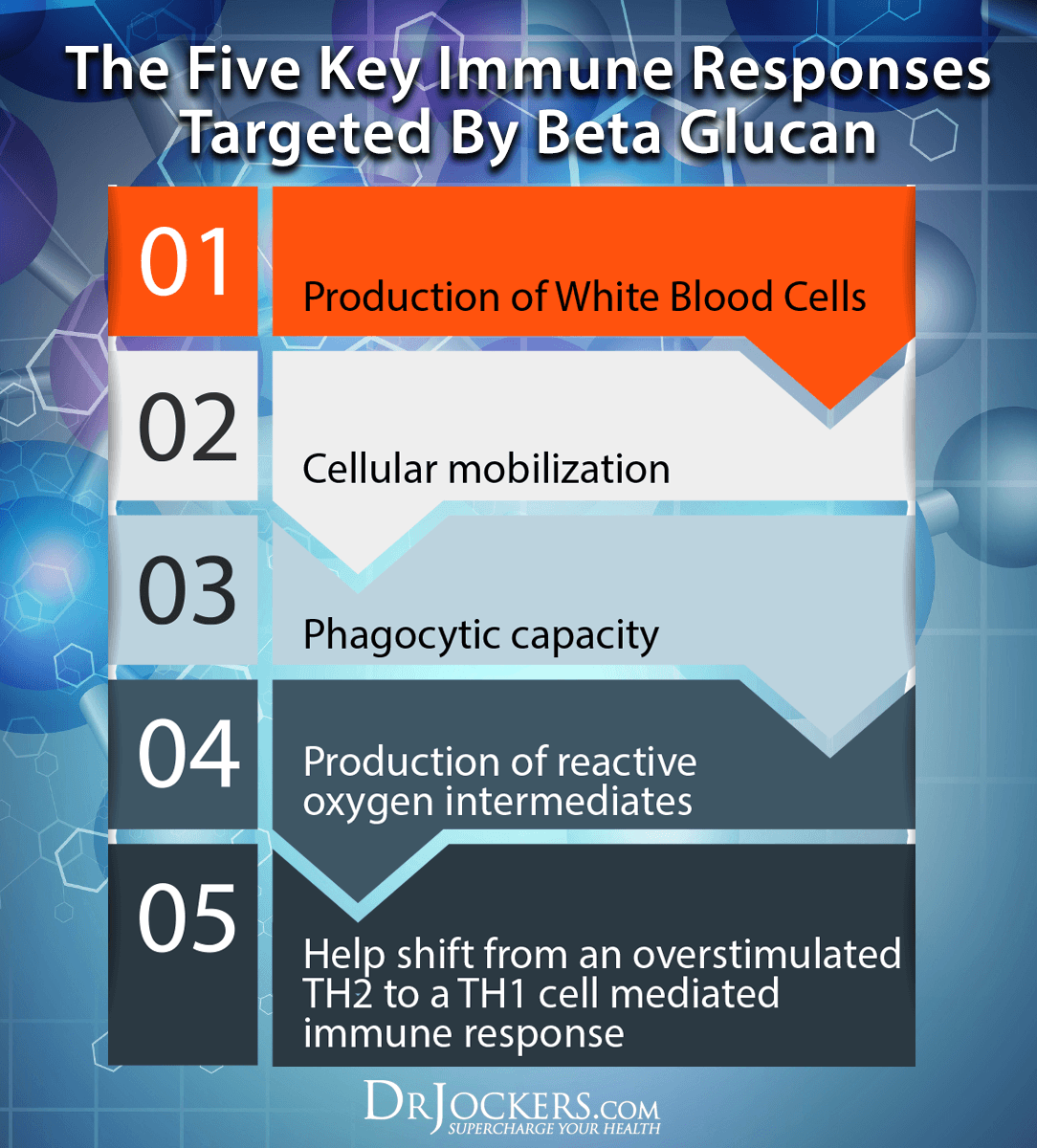 5. PBS: 5 Things You Need to Know About Juicing: Link Here