What Are Ketones and Are They Healthy?

If you are up on your health news or follow anyone in the health field, you have likely heard the term ketogenic diet. The goal of the ketogenic diet is to adapt the body to utilize fat as its primary fuel source instead of sugar. The body does this by first converting fat into what are called ketones that the cells can then burn as fuel. It is at this point that I typically get asked, what are ketones?

In this article, I am going to clear up any gaps, explain exactly how ketones work, and why ketosis can be so beneficial for the human body.

For our ancestors, eating three meals a day just wasn’t a thing. Instead they would hunt and forage for the foods they could find. When there wasn’t food, they wouldn’t eat.

What this means is that sometimes they would go for days at a time with no food. To sustain life during times of scarcity, the body is thought to have developed the ability to utilize fat as an alternative fuel source.

In a traditional nutrition course, you would learn that sugar is the body’s primary fuel source while fat is a secondary fuel source. When sugar stores are burned up, the cells then convert to burning fat as an energy source.  What we are finding out now is that fat can actually be a healthier and more sustainable source of energy.

Our Society Is Full of Sugar Burners

Modern day, we have an abundance of food that is available to us at all times. Most of us regularly eat three meals a day with intermittent snacking in between.

This kind of frequent eating, along with an overemphasis on carb-rich and sugary foods, causes a reduced ability to burn fat. As these foods damage our bodies on a metabolic level, we actually lose the ability to produce ketones.

This type of reliance on sugar creates massive blood sugar spikes, inflammation, hormone imbalance, and ultimately many of the chronic diseases that plague our society today.  Luckily, by adopting a more ketogenic style of eating, we can reverse this damage and revert back to the efficient fat-burning machines we were meant to be!

The Advantage of Ketones

The energy currency of the body, comes in the form of Adenosine Triphosphate (ATP). The mitochondria within every cell in the body either metabolize glucose or ketones to form this important energy molecule.

Based on what we understand of cellular energy metabolism, ketones are able to create much greater amounts of energy per molecule than glucose.   This means when the body begins to convert fat into ketones, you actually have a much more stable and sustainable energy source.

At the same time, burning fat does not create the same insulin and blood sugar response that burning sugar does. This is part of the profound benefits of being in ketosis including, improved hormone balance, lowered inflammation and improved brain health.

Likewise, many people report feeling much more stable when they go into ketosis. Feeling less hungry, gaining control over cravings, and often experiencing a much more stable emotional state.

How The Body Gets Into Ketosis

As we find out more about the benefits of ketones, people are intentionally putting themselves into this state for therapeutic benefits as well as a heightened state of mental performance.

There are several ways to promote an increase in ketone bodies, outlined below. The general strategy is to supply the body with ample fats while depleting blood glucose to signal the metabolic shift towards fat-burning.

Unlike the simple conversion of sugar into glucose, fatty acid metabolism actually results in 3 different types of ketones:

BHB, based on its molecular structure, is not really a ketone. Yet its presence is part of the beneficial effects of being in ketosis. Among its benefits is the ability to modulate BDNF in the brain and stimulate the growth of new neural tissue (1). When the body produces ketones, some are used for energy while the rest are circulated or excreted. Because of this, ketones are measurable in the blood, the saliva, and the breath.

Different ketones are measurable as follows:

BHB: In the blood

Acetone: In the breath

AcAc: In the urine

Although ketones can be measured in different ways, not all of them are quite an accurate representation of the body’s true ketogenic state. This is why most experts rely on the measurement of BHB through the blood as the ideal method.

Although this sounds invasive, new technology has actually made performing ketone measurements at home fairly simple and cheap.

As I said already, blood measurement for BHB is considered the most accurate depiction of the ketogenic state. This is performed in a similar fashion to blood sugar testing.

Many of the blood glucose monitors on the market also have the ability to read blood ketones. Using a different type of testing strip, all you have to do is prick your finger, collect a small sample of blood, and place it into the monitor for a quick ketone measurement.

The monitor I usually recommend is this Keto Mojo monitor.

The ranges you are looking for here are as follows:

Although mild ketosis can be achieved rather quickly, it can take up to 2-3 weeks to enter an optimized ketogenic state (2). 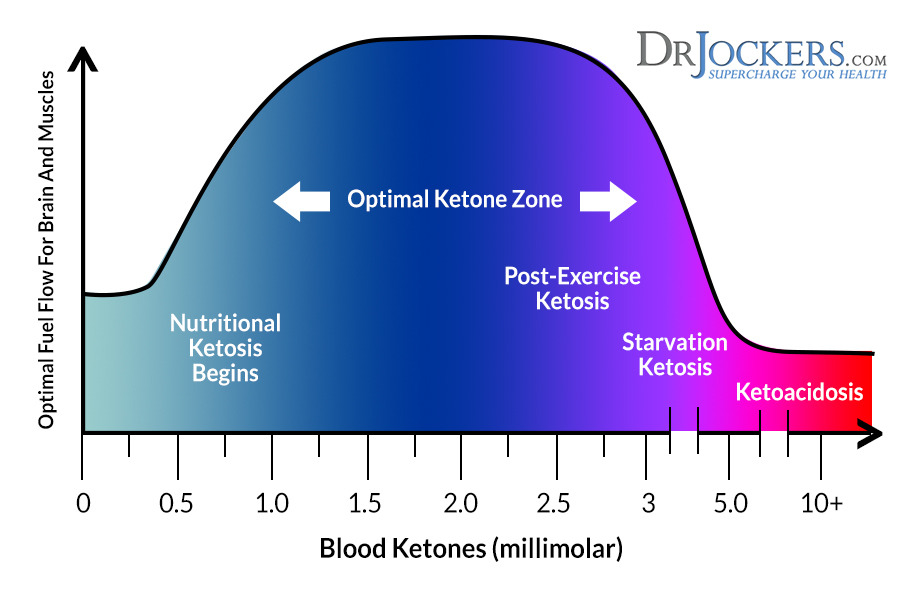 For a ketone measurement that doesn’t require a blood draw or the recurring expense of test strips, breath ketones are also a reliable measurement (3).

Using a device such as this Ketonix breath analyzer, you can perform a simple ketone measurement anytime you need.  Although this device will run you for about $190, over time it will likely be a more economical option compared to blood testing since it is only a one-time fee.

It is important to note that while breath ketone measurement is mostly reliable, factors such as alcohol and water consumption may influence your measurements. Luckily you can take multiple measurements throughout the day to get a better idea of your average ketone levels.

Using the Ketonix breath ketones measurement, the device will light up different colors depending on your state of ketosis. Based on the chart below you would want to be in the yellow or red zone for optimal nutritional ketosis.

The body releases unused acetoacetate through the urine upon which it can then be measured using special testing strips. This is a simple option that is also very cost effective at about $10 per 100 strips.

Although simple and cheap, urine measurement of ketones can be somewhat unreliable. This measurement will allow you to see if your body is producing ketones, it doesn’t necessarily provide any insight into how well your body is utilizing ketones for energy.

During the beginning phases of keto adaptation, the body has a poor ability to utilize ketones as energy. Even if the body is producing ketones, most of them will be excreted. Once the body becomes keto-adapted, higher amounts of ketones are used as energy and less are excreted naturally.

So if you were to choose urine measurement for ketone analysis, I would recommend measuring daily from the very beginning of your eating plan. You should notice an initial increase in ketones into the high range followed by a gradual decrease as you become keto adapted.

Although your ketones will be high, you will actually be hypoglycemic until your body learns to utilize ketones effectively. As you become keto-adapted you should look for a drop in urine ketone levels between 2-3 weeks of eating a ketogenic style diet.

This drop in urine ketone levels lets you know that your body is becoming more efficient at actually using them for energy.

The state of nutritional ketosis is sometimes confused with a state referred to as ketoacidosis. Ketoacidosis is an extreme ketotic state that occurs mostly in diabetic populations. When an individual is unable to produce insulin, sugar cannot get into the cells. As a response, the body drastically upregulates ketone production.

In this state, there is both an extremely elevated blood sugar and blood ketone level simultaneously (4). This will cause the overall pH of the body to drop to a dangerously acidic level which can be fatal.  While this condition can be harmful for the individual, it is important to note that entering this state is actually very rare.

To put this into perspective, this condition mainly occurs in unmanaged diabetics. In this state, ketone levels will reach 20 mmol/L and beyond. An otherwise healthy individual could water fast for 20 days and still maintain a ketone concentration below 20 mmol/L.

In other words, unless you are diabetic, reaching a state of ketoacidosis through diet alone is virtually impossible. Ketones are the body’s alternative fuel source to sugar. Derived from fatty acids, they provide a much more long-lasting and stable production of energy. In addition to providing stable energy, ketones also do not promote the inflammatory rise and fall of insulin as does sugar.

Modern dietary habits have altered our metabolism and made sugar our primary fuel source. By following a ketogenic style of eating, it is possible to reverse these metabolic defects and take advantage of the benefits that ketones have to offer for our brains and bodies!